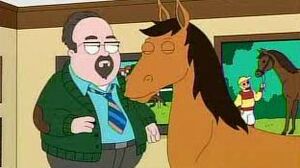 Michael "Mike" McShane is an American actor, singer, and improvisational comedian who first became known through his appearances in the early 1990s on the British version of the television show Whose Line Is It Anyway?

He provided the voice for Brian P. Mahon in "Don't Look a Smith Horse in the Mouth".

Retrieved from "https://americandad.fandom.com/wiki/Michael_McShane?oldid=49666"
Community content is available under CC-BY-SA unless otherwise noted.