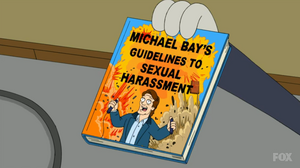 Michael Benjamin Bay (born February 17, 1965) is an American film director and producer. He is best known for directing high-budget action films characterized by fast edits, polished visuals and substantial use of practical effects.

When Roger as Francine's agent tries to get an extra to perform a sexual act for him, she accuses him of sexual harassment in "White Rice". Using Michael Bay's Guidelines to Sexual Harassment. Roger claims it isn't harassment if he fails to get an erection.

Retrieved from "https://americandad.fandom.com/wiki/Michael_Bay?oldid=63401"
Community content is available under CC-BY-SA unless otherwise noted.