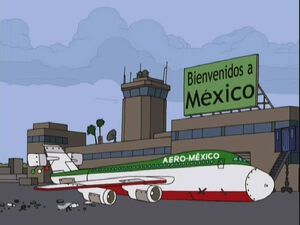 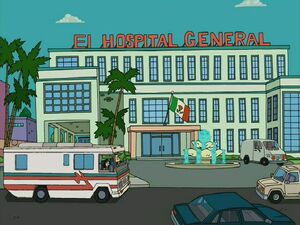 Stan and Steve Smith visit Mexico in "Deacon Stan, Jesus Man" so that Steve can have an abortion at the El Hospital General. Stan describes Mexico as "God's blind spot".

Roger flies to Mexico and tries to buy a Mexican restaurant franchise in "I Can't Stan You".

Stan takes Steve to Mexico in "Toy Whorey" to lose his virginity and quit playing with toys but they are kidnapped.

Hayley looks forward to a company trip to Belize with Ax Jenkins in "My Affair Lady", noting that it would be good to travel somewhere other than Mexico to have sex out of the United States.

Stan reports that everywhere that he has vacationed has a copper mine in "Manhattan Magical Murder Mystery Tour", listing Mexico, Utah and Nebraska as examples.

After unsuccessfully posing as a married couple, Hayley and Klaus are deported to Mexico in "One Fish, Two Fish". When Klaus tries to contact a 'friend' to sneak them back across the border, he tries to rob them and dumps them in the desert