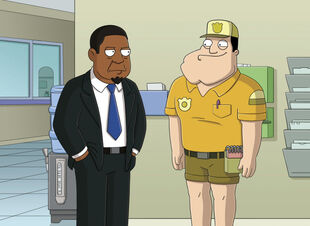 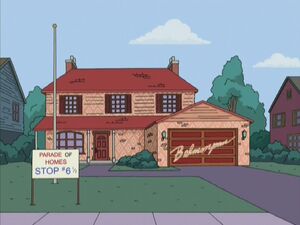 When the neighborhood committee bypasses the Smith home for the Parade of Homes, Francine becomes depressed. Stan tries to cheer her up by taking her out for a fancy dinner but is rebuffed by the Maître d'. The next day, Stan ponders his fate and finds he is being written a parking ticket. When the officer refuses to take it back, Stan beats him up. In court, Stan is sentenced to community service as a meter maid. Stan is humiliated at first but soon finds he has more power than he ever dreamed of. Stan gets their house into the parade of homes and treats Francine to the fancy meal he promised. Soon Francine feels she needs more and leans on Stan to abuse his power. When Stan tries to muscle Belmonpan, the world famous Jamaican house painter, to paint their house, he finds he is powerless because Belmonpan has diplomatic immunity. Trying to figure out what to do, Stan decides to skim from the meters keeping the change for himself and Francine. Francine soon finds herself living the high life again and everything seems fine until Stan runs into Ron Turlington of Parking Internal Affairs who informs him they are aware of shortages in the collections. When Internal Affairs shows up at the Smith house, Stan tells Francine the jig is up and they destroy all of the items they purchased. When they try to flush the remaining change, Stan tells Francine he wished he had never exposed her to the crime and Francine also regrets having led Stan to believe she wished he was a 'somebody'. When Ron arrives at their door, he demands Stan's shorts and badge back. Stan thinks he is being fired but it turns out that his community service is up and Ron dismissed him as a suspect in the change thefts because of his CIA connection.

Meanwhile, Hayley poses nude for a college art class and is surprised to see Roger there. She objects to him painting her in the nude but he assures her it's okay until she finds Steve emerging from the bathroom with it. Roger offers to sell her the painting but, when Steve also demands a chance to buy it, Roger decides to hold an art auction. Klaus tries to beat them out but is quickly passed. At the last minute, Francine buys the painting saying it would be perfect for the Parade of Homes to Hayley's horror. Hayley gets a cold shiver when she sees Steve rubbing his own boobs to her picture at the Parade of Homes. During the rampage to rid the house of tainted goods purchased with Stan's stolen change, Francine shreds the painting to Roger's horror and Steve finds out it was Hayley. Shocked at first, Steve dismisses it as no one knew what he was doing with the painting but Roger tries to convince him that all of his dead relatives, God and James Doohan as Scotty from Star Trek all knew what he did and he must kill himself. Hayley attacks and knocks out Roger.

Previous Episode /// Meter Made \\\ Next Episode