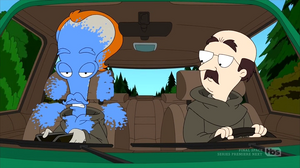 Mervin is a member of The Order of the Hand and Nest, a group of egg thieves in "Shell Game".

When he and Roger attempt to steal swallow eggs from the Chimdale Mission, they think they have gotten past Steve and his group of egg protectors. However, Roger finds out that the eggs they thought they had have been replaced with exploding dye packs.

Mervin and the rest of the order are killed when attempting to steal an extremely rare century eagle egg on Skoal Island. To save Steve from being killed, Roger rolls the egg towards a cliff and the members of the order fall over in their attempt to grab it.

Mervin is voiced by Alan Tudyk.

Retrieved from "https://americandad.fandom.com/wiki/Mervin?oldid=76941"
Community content is available under CC-BY-SA unless otherwise noted.