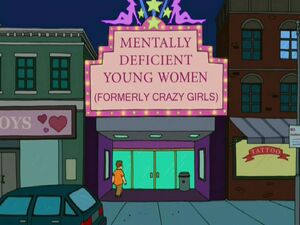 Mentally Deficient Young Women (a politically correct name for the strip club previously known as "Crazy Girls") is where Hayley gets a job as a waitress and eventually as a stripper in "Stan Knows Best". When Hayley gets cut off from funds for moving in with Jeff Fischer, she gets work at the strip club but feels the strippers are being demeaned by taking off their tops.

The manager sets her straight and soon Hayley is stripping, too. In celebration of Saunders' first assassination, Stan and his friends go to Hayley's club where he is appalled to see her dancing topless on stage. He then roughs up Jeff thinking that he had put her up to it but finds out that she had been lying to him telling him that she went out to "torch SUVs". The two then go to the joint to take Hayley out.

When she resists, Stan, with a little help from Jeff, is forced to beat all her colleague strippers into submission only to find out that all the women there had started stripping because their fathers never supported their choices in life. Hayley is forced to quit when, during an act, her wig falls down revealing her completely bald head which grosses out all the men present.

Retrieved from "https://americandad.fandom.com/wiki/Mentally_Deficient_Young_Women?oldid=46346"
Community content is available under CC-BY-SA unless otherwise noted.