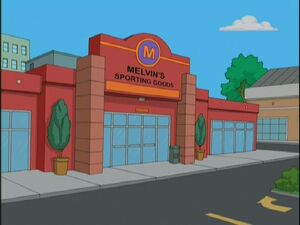 Melvin's Sporting Goods is Steve shops for speedos in "Roger 'n' Me". In the store, Steve meets his crush Trudy Lawrence and Hayley meets a guy named Miles that she thinks is cute, but find out they are a couple and plot to break them up, first by planting an earring on Miles at the Power Gym, then recording Trudy and manipulating the conversation to sound like she is having an affair. When they confront each other at George C. Scott Park, the plan starts to work until they tussle and Miles falls face-first into a grill while Trudy falls into a stream and is grabbed by an alligator. Hayley and Steve both decide they are no longer interested in the two.

Retrieved from "https://americandad.fandom.com/wiki/Melvin%27s_Sporting_Goods?oldid=37024"
Community content is available under CC-BY-SA unless otherwise noted.