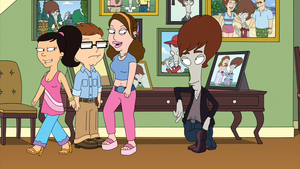 Melissa is a frequent background character, often appearing in school scenes or at parties.

Melissa appears on the campus of Groff Community College in "Iced, Iced Babies".

She dances at Vince Chung's party in "Helping Handis".

She can be seen on the cruise in "The Vacation Goo".

She can be seen in Mr. Brink's class at Rutgers in "Spring Break-Up" as Stan searches for Jessica and in the Pearl Bailey High School cafeteria and dance in "1600 Candles".

Melissa gives Reginald Koala's human form the cold shoulder when he is begging in "Family Affair". She also cheers on Tank Bates at FedExField in "Daddy Queerest".

In "Bully for Steve", she is present for Stan's fight with Stelio Kontos and attends Vince Chung's Halloween bonfire in "Best Little Horror House in Langley Falls".

She can be seen walking into Cirque du Hey Hey Hey in "Stanny-Boy and Frantastic" and working out at the YMCA in "You Debt Your Life".

She and Beth are friends with Roger's persona of Bing Cooper, a sexually-active high school student in "I Am the Walrus". As Steve looks over pictures of Roger's supposed life, he explains his backstory includes learning Japanese which he responds with "ching-chong" to Melissa.

She stands outside of Stuffington Academy when Senator Buckingham arrives in "School Lies" and appears at the carnival in "Why Can't We Be Friends?".

Melissa attends class at M.I.T. in "National Treasure 4: Baby Franny: She's Doing Well: The Hole Story" and is seen at Brenda and Theo's reception in "The Boring Identity".

She is seen at Jump City! in "Da Flippity Flop" and rejects Steve and Snot prom request in "Steve and Snot's Test-Tubular Adventure". She is also seen later at the prom.

Melissa is seen while Hayley sings "The Perfect Gift" in "Minstrel Krampus", while waiting to meet a princess in Fairy Tale Land at Familyland Theme Park in "Familyland" and at the Winter Harvest dance in "Introducing the Naughty Stewardesses".

She is among the girls that lament for Steve in "News Glance With Genevieve Vavance", can be seen near the school doorway in "Hayley Smith, Seal Team Six" and watches the victory parade for The Langley Falls Bazooka Sharks in "Standard Deviation".

She appears at the Lanceton Recreation Center in "Garbage Stan", is also present at Oedipus Rox in "Tapped Out" and is at the school dance in "The Chilly Thrillies". In this appearance, she is voiced by Charlet Chung.

Retrieved from "https://americandad.fandom.com/wiki/Melissa?oldid=91940"
Community content is available under CC-BY-SA unless otherwise noted.