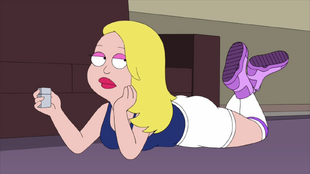 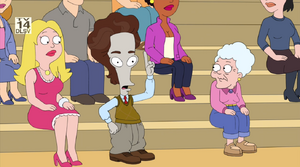 When the school guidance counselor quits, Francine takes over after impressing Principal Lewis with her advice when he gets a piece of dollhouse furniture stuck in his teeth. When Steve looks forward to putting on a fashion show with the guys, she expresses some concerns but he refuses to allow what others think to bother him. Roger, posing as a janitor, warns her that the school bad girls will tear them apart, so she decides to tell them to back off of him. She tries to strike up a friendly conversation but gets mauled by them. However, she finds herself drawn in and manages to impress them enough to be accepted as Stan tries to pose as a student to attract Francine. As they take over Francine's office to skip class and plan a getaway at a lake house, Steve arrives in his emcee outfit. 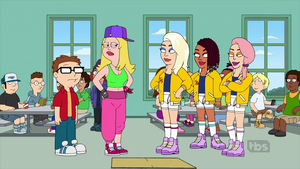 At the lake, Francine convinces them to go to the show but they plan to prank Steve by having Francine dump a bucket of clam chowder on his head. She hesitates, but when they offer her her own group jacket, she proceeds with the prank. Francine apologizes to Steve, but he reveals he wasn't angry because of lessons learned from the previous counselor. She admits to him that she suffered as a youth from the archery team and never expressed herself. When Steve wonders what she would have done to express herself, she admits she would breakdance so she tries to breakdance out of her problems. 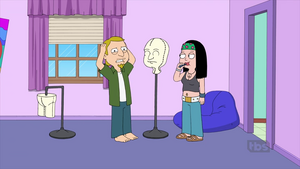 She flops in front of the school, but when the girls find out that Steve is her son, Francine fires back with personal dirt from their files, ruining their reputations.

Meanwhile, Jeff awakens to discover his hat is missing and freaks out on the day they were supposed to go to the zoo. Hayley tries to substitute a new hat but he rejects it. As Hayley pledges to help him cope, he eventually calms down to go pick out a new hat at the store as the plot is to be continued.

Retrieved from "https://americandad.fandom.com/wiki/Mean_Francine?oldid=90201"
Community content is available under CC-BY-SA unless otherwise noted.