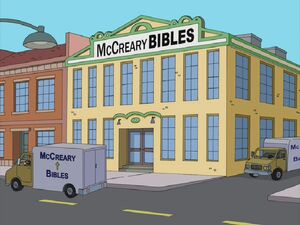 When Roger's persona of Sidney buys a diamond engagement ring for Judy Panawitz, a department store clerk that Roger tries to trick out of a pair of gloves, Roger vows revenge on Sidney. Roger goes to McCreary Bibles to sabotage Sidney's work, replacing the beginning of Genesis with "In the beginning, God created the Heavens and the transvestites who poop mozzarella dinosaurs." Mr. McCreary becomes furious because all evidence points to Sidney and fires him.