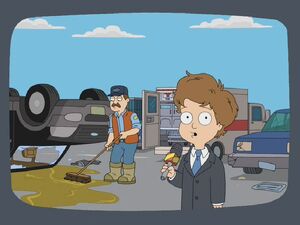 Matty Moyer, voiced by Skyler Gisondo, is the reporter for Channel 3's news "Kids Beat". He graphically describes the carnage of charred flesh and stepping on an eye in an accident that Stan was involved in in "Stanny Slickers 2: The Legend of Ollie's Gold".

Matty is also referenced on the Playgirl cover in "Office Spaceman".

Matty appears in the audience in "Phantom of the Telethon".

Matty is voiced by Skyler Gisondo.

Retrieved from "https://americandad.fandom.com/wiki/Matty_Moyer?oldid=58721"
Community content is available under CC-BY-SA unless otherwise noted.