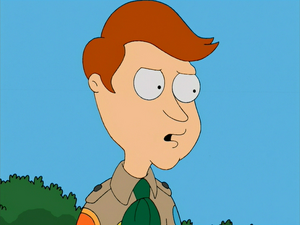 Matthew Lyn Lillard (born January 24, 1970) is an American actor. He is known for his roles as Stevo in SLC Punk, Shaggy Rogers in the live-action theatrical Scooby-Doo films, and as Stu Macher in Scream. In 2010 he returned to the role of Shaggy, but this time in animated form replacing a retired Casey Kasem.

He has a voice credit as one of the Scout Rangers of America Troop 264 in "Homeland Insecurity".

Retrieved from "https://americandad.fandom.com/wiki/Matthew_Lillard?oldid=66683"
Community content is available under CC-BY-SA unless otherwise noted.