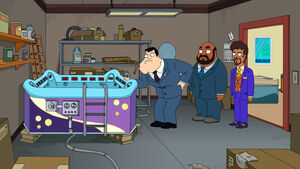 Marguerite is the hot tub salesman that Principal Lewis is acquainted with. In "Hot Water" Lewis takes Stan Smith shopping for a hot tub at the Little Shop of Hot Tubs when he complains of being stressed out. Stan is drawn to a used hot tub in the store back room that Marguerite tries to talk him out of purchasing but Stan decides he wants it anyways.

Marguerite later reconsiders his position on the tub when he gets a chance to party with Principal Lewis and Stan until they are chased off by Francine. Still annoyed by his feelings about the hot tub, Marguerite investigates and found out that the tub came alive after being struck by lightning and killed its original owner and later escaped from a mental hospital.

Marguerite calls up Principal Lewis and they go to Stan's house where the tub swallows Lewis. Marguerite tries to escape but the hot tub fills his car full of water, causing him to crash into a tree and is killed.

Principal Lewis and Marguerite appear during "He's Got a Kink" in "The Missing Kink". Stan also invites them over to watch him have kinky sex with Francine, some of which horrifies them.

Retrieved from "https://americandad.fandom.com/wiki/Marguerite?oldid=67798"
Community content is available under CC-BY-SA unless otherwise noted.