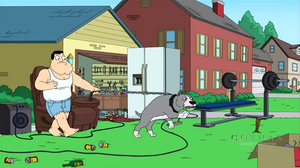 Manslaughter is a vicious dog that Stan gets in order to torment Roger after he dumps the Smith family in order to pose as Greg and Terry's newly adopted son, Michael in "A Boy Named Michael".

Stan takes insult at being accused of being low-class so he starts living as low-class, moving all of the family junk and belongings to the front lawn of the house and sprays water on Manslaughter to make him even meaner until he sees Roger attempting to sabotage Terry's car by cutting the brake line.

Retrieved from "https://americandad.fandom.com/wiki/Manslaughter?oldid=55990"
Community content is available under CC-BY-SA unless otherwise noted.