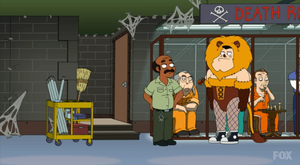 Manny is a handyman who first appeared in "Stan's Night Out" when Dick was tracking his stolen car down, he asked who Fernando Jaramillo was and then asked Dick how old he thought he was, Dick guessed 55 and Manny revealed he was 57.

Manny appears in the CIA in "Shallow Vows", where he purposely lets blind animals out of their cages, as he finds them running into various objects amusing.

Manny worked in the Smith's house in "Best Little Horror House in Langley Falls". When Stan's collection of real serial killers seem listless, Stan calls for Manny to come in and check the lights. Later when the family hides from the killers in the attic after Roger sets them loose, Manny arrives impaled on a broom and falls over.

Manny returns in the opening credits of "Flirting With Disaster", cleaning the interrogation room. He also comes running when Principal Lewis feeds the janitors at Pearl Bailey High School in "Garfield and Friends".

In "The Hall Monitor and the Lunch Lady", he helps clean up vomit and cowers in his car at a Sonic Drive-In in "Stompe le Monde". 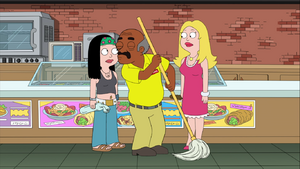 Manny's basic design is reused as Frank, a custodian at a Wichita, Kansas Sub Hub in "The Old Country" where Hayley and Francine pose as secret shoppers. After finding out that Sub Hub encourages its employees touching the customers, Frank plants a kiss on both Hayley and Francine

Manny is voiced by Erik Durbin.

Retrieved from "https://americandad.fandom.com/wiki/Manny?oldid=90292"
Community content is available under CC-BY-SA unless otherwise noted.