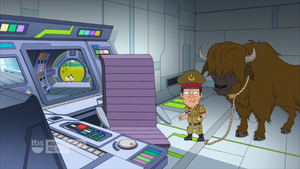 Maniyak is a yak the Thailand interrogator buys to rip apart Stan and the other CIA agents in "CIAPOW".

The interrogator names his yaks "Yaks Cousteau" after Jacques Cousteau, "Yakie O" after Jacqueline Kennedy Onassis, also known as Jackie O, "Yakie Chan" after Jackie Chan and "Yakety Yak - Don't Talk Back" after the song "Yakety Yak" by the Coasters. Inspired by Stan calling him a maniac, the interrogator buys another yak to be named "Maniyak". As he is giving it a tour of the prison, he observes Stan and the agents in the process of escaping.

Retrieved from "https://americandad.fandom.com/wiki/Maniyak?oldid=57181"
Community content is available under CC-BY-SA unless otherwise noted.