Francine voiceover: This isn't how she wanted to end her day...or her life.

Francine voiceover: They made love, not one, not twice, but two and a half times. 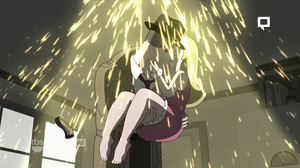 Francine: [after finishing reading her novel] The end... of the book I wrote!
Steve: I loved it! The whole time, I was imagining myself as Tony Hurt, until the love scene when I became the housewife for some reason.

Francine: Well, you're not the only ones going nuts for The Cobra in the Bag: A Tony Hurt Mystery.
Steve: By F.R. Ancine? Oh! Francine! You clever bitch.

Stan: What day of the week is it? Do I have to be at work?

Francine: [enthused] A real New York hotel! How many Wall Street bankers have had their first prostitute here?

Francine: [speaking of James Patterson] There are more of his books left on beaches than used condoms.

[After performing their "Wheels and the Legman" opening, Roger is surprised that Steve isn't in costume]
Roger: We doing this, or what?
Steve I can't change as fast as you.
Roger: Right.

[Steve and Roger return to the hotel with Steve in his costume]
Steve: Glad we didn't have to go all the way to Central Park to find this stuff.
Roger: Well, sometimes a massive fire breaks out in a senior home across the street right when you need it...and right when you set it.

[Roger gives Stan a receipt with a smudge of lipstick on it]
Steve: Oh, Mom, I'd recognize your shade anywhere - dog dick red.

[Roger finds Francine's room key in the hotel ice machine]
Roger: I bet she was locked in her closet the whole time. Probably by someone who roofied her Fanta, and then finished her Fanta because he's built-up an immunity to roofies.
Steve: You fake-kidnapped my mom, didn't you?

Stan: When this day started Hayley, I was bummed to be stuck with you.
Hayley: I wasn't super-thrilled either.
Stan: But now I know you're not the worst person in the world to hang out with.

[D.O. Rothy explains that she was being intimate with Daniel]
Daniel: That's true, I put that ass to sleep.

[Steve wants Roger to throw him like a bowling ball]
Roger: You know I stick my fingers in the holes pretty deep, right?

Retrieved from "https://americandad.fandom.com/wiki/Manhattan_Magical_Murder_Mystery_Tour/Quotes?oldid=91638"
Community content is available under CC-BY-SA unless otherwise noted.