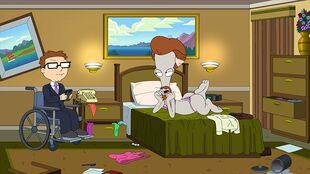 Wheels and the Legman 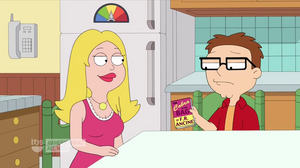 The episode starts with a film noir opening in which Francine is rescued in a book she writes and prepares for a trip to Manhattan for a "Best Lonely Housewife Detective Novella - Soft Core" award. Checking into their hotel, they spot James Patterson, a famous author up for a lifetime achievement award which inspires Roger and Steve to dig out Wheels and the Legman. Entering the contest registration, Francine meets her competition, D.O. Rothy, but is given the cold shoulder. Roger and Steve set off to meet Mr. Patterson to pitch their characters, only to be brushed off as fanboy losers. They plow ahead with their pitch, demonstrating their detective skills only to be given the slip. In the hotel bar, he compliments Francine's writing of dialog, but when Roger and Steve arrive, he slips away again as Rothy make a vague threat. At the presentation, Francine wins but fails to show up so Rothy wins by default. Suspicious, Roger and Steve decide to solve the mystery of Francine's disappearance.

Searching her room for clues, they find a receipt for the hotel spa. There, they find a piece of menu from a restaurant with Francine's lipstick. Meanwhile, Francine is chained up, yelling for help. Roger pieces their adventures to date which leads him to the third floor ice machine at the hotel where he finds her room key and believes she is locked in her closet, leading Steve to conclude that Roger locked her up. He admits it, claiming that he needed a super story to pitch, irritating Steve so that he quits their game, but when he goes to her closet to free her, they find she has been kidnapped for real. Forced back into their personas, Steve falls to the floor and discovers odd footprints on the floor. Confronting her rival, she provides a solid alibi from awards host Daniel that they were having sex together. 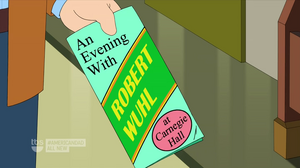 Stan and Hayley pair up to try to find something to do and are given tickets to A Night With Rogert Wuhl at Carnegie Hall. Arriving, they find the Hall closed and discover that Robert was the one who gave them the ticket to spend the day with him. He takes them to a deli to stock up on potato salad for a trip to his home. There, Hayley threatens to bolt and Robert vows to catch them. They bolt anyways and Robert chases them trough the hotel. Roger decides that the surprise guest is the guilty party and they confront him, but he explains about being busy with Stan and Hayley. As they mope over not being able to impress Mr. Patterson, they spot him wearing shoes to match the footprints they found. Roger flings Steve like a bowling ball, knocking him over and freeing Francine from his bag, where they discover that he planned to force her to write youth novels for him as he believes that his writing is too advanced for them. While they are getting in their final words, he manages to get away, where he steals their characters for his book, changing them to "Skids and the Walking Guy", as well as taking their movie distribution ideas.

Retrieved from "https://americandad.fandom.com/wiki/Manhattan_Magical_Murder_Mystery_Tour?oldid=78744"
Community content is available under CC-BY-SA unless otherwise noted.