Man in the Moonbounce 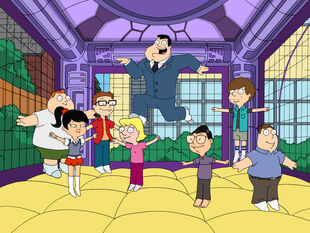 Man in the Moonbounce
Steve must become the "man of the house" when Stan relives his childhood. 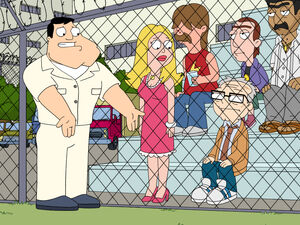 Stan decides that by Steve's 14th birthday he should start acting like an adult. However, an experience in Steve's moonbounce brings out the child in Stan. It turns out that Stan never had a childhood because of his father leaving. Roger (as psychologist Dr. Penguin) convinces him to encourage his inner child to help himself adjust. Stan takes things too far when he and Steve's friends decide to egg a bully's house and are caught by the police and ends up getting sent to minimum security Chimdale Prison.

Steve takes up his father's duties, which the responsibility causes him to age prematurely. The lack of responsibility in prison appeals to Stan as he can act as much like a child as he wishes, causing him to decide to stay in prison as long as possible. Stan and his fellow inmates decide to prank the warden with a ball full of bees during a kickball game to avoid early release. Stan sees what the effect of responsibility is having on Steve and changes his mind, interrupting the prank and kicking the ball himself to free the bees. 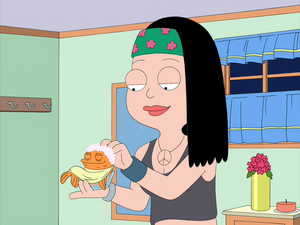 Just as it appears Stan will get his early release, Roger interferes resulting in Stan serving his entire sentence. When Stan returns home, he first punches Roger. He then finds Steve, completely overworked. Stan sends his son sliding across a water slide, causing Steve's youth to be restored.

Meanwhile, Hayley finds Klaus depressed, missing things like getting his hair cut. She decides to perk him up by giving him a doll's wig and trimming it. But she botches the job, upsetting Klaus who tries to drag her into a toilet bowl. After he calms down, she tries to restyle it, although they both recognize the attempt as a failure.

Previous Episode /// Man in the Moonbounce \\\ Next Episode