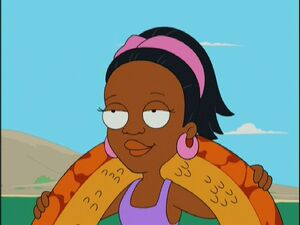 Makeva is a member of the refugee camp that Stan decides to turn into a summer camp in "Camp Refoogee". She becomes becomes attracted to Steve at first while killing a snake for dinner. But becomes the prize in Stan's Camp Olympics when she is captured by Ozomatli and his band of warriors. When Steve beats Ozomatli in a race to decide the winner of the Olympics, Makeva surprises him by romancing Ozomatli, saying she is just a crazy chick.

Makeva is voiced by Thandie Newton.

Retrieved from "https://americandad.fandom.com/wiki/Makeva?oldid=51979"
Community content is available under CC-BY-SA unless otherwise noted.