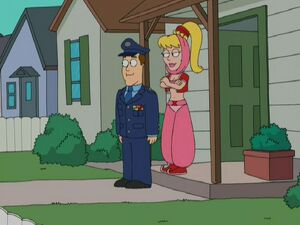 I Dream of Jeannie is a 1960s American sitcom with a fantasy premise. The show starred Barbara Eden as a 2000-year-old female genie, Jeannie. And Larry Hagman as Major Anthony Nelson, an astronaut who becomes her master, with whom she falls in love and eventually marries.

During the musical number "I Want A Wife (Not A Partner)" in "Stan of Arabia: Part 1", Jeannie is one of Stan's fantasy women who serve their husbands.

Retrieved from "https://americandad.fandom.com/wiki/Major_Nelson_and_Jeannie?oldid=51978"
Community content is available under CC-BY-SA unless otherwise noted.