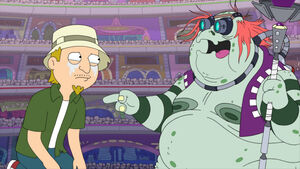 For the creature, see: The Majestic

"Majestic" is a 2007 song by American rock band Wax Fang. It appears as the first track on their album La La Land.

In "Lost in Space", the song is sung by The Summoner when Jeff Fischer must have his mind probed by The Majestic to prove that he always loved Hayley in an effort to win his freedom.

Later, a shape-shifter puts on music as part of her seduction of Jeff, restarting a record of "Majestic". She quickly stops the record and apologizes, stating that the song is popular in the space mall run by Roger's people.

It would cause such surprise, it would make all of their minds electric

In such disbelief, I thought I was asleep when I met you

My heart liquefied and I sighed, oh this must be a dream

If I forget to set the alarm and sleep on through the dawn, don't remind me

I'd rather be dreaming of someone than living alone

If you're searching the lines for a point, well you've probably missed it

There was never anything there in the first place

Retrieved from "https://americandad.fandom.com/wiki/Majestic?oldid=57416"
Community content is available under CC-BY-SA unless otherwise noted.