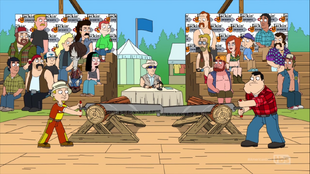 Lumberjerk
Stan is forced to partner with Jeff in a lumberjack competition. 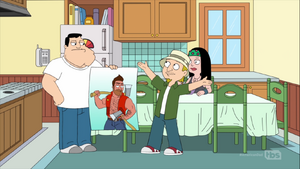 Stan looks forward to the lumberjacks at the opening day of the Langley State Fair until Hayley reminds him that he is supposed to spend the day with Jeff. There, they are told of a lumberjack competition and are invited to participate as amateurs. Stan desperately tries to find another partner, but no one else is available. Jeff surprises him by being quite skilled, but Stan takes the credit to look good in front of the lumberjacks. Despite this, Jeff is just happy to spend time with Stan, but Hayley gets annoyed when Stan continues his bragging at home, so the lumberjacks invite the pair to face off in a singles competition. Knowing he's out of his league, Stan seeks help from Roger and manages to fight to a tie with Jeff. They are given the chance to go to Alaska to face off in a championship, but Roger informs Stan that his wood has been replaced with a fake wood made of butter to make it easier to cut, and Jeff will easily beat him in real competition.

Roger does provide him with a turbobooster to make Jeff's chainsaw uncontrollable, but when a pilot tries it out, it saws the plane in half and causes it to crash. Jeff and Stan both survive, but when Jeff tries to use his chainsaw to build a fire, Stan is forced to admit he cheated. Jeff goes about saving them by topping a tree and placing a homemade beacon at the top, but Stan decides it won't do to have Jeff look like the hero, so he tries to knock out the beacon with a flare gun, but misses and sets the tree alight below Jeff, causing him to fall to the ground, just as a passing helicopter sees the fire. At the hospital with Jeff, Stan recounts his 'heroic' story to an artist for the newspaper. When Jeff starts to recover, Stan offers to increase their annual day together to twice a year, but Jeff tells him to go f*** himself. 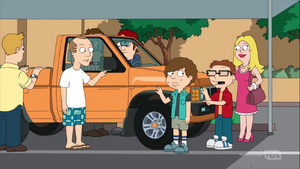 Meanwhile, Francine, Steve and Snot find a competition to win a truck by keeping their hand on it the longest. Snot is quickly eliminated due to Steve's treachery, as are the other contestants, save Parker, who burned down their houses to eliminate the competition. When a gentleman with a pregnant wife tries to inform them that it is their truck that they parked in the shade, the trio insist on going with them to the hospital and even to their home. When it seems like their intrusion starts to take its toll on the couple, Steve and Francine relent, and Parker and his 'partner' claim the truck. However, during their celebratory high-five, they neglect to notice Klaus matching the orange paint of the truck, and he becomes the true winner.