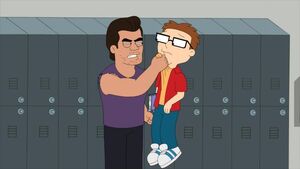 Luis Ramirez is a bully that picks on Steve Smith at Pearl Bailey High School in "The Full Cognitive Redaction of Avery Bullock by the Coward Stan Smith". Steve goes to Roger for help and he brings in Stelio Kontos to beat Steve up first, explaining that the bully will reject Stelio's sloppy seconds. As Steve laments having trusted Roger, Luis actually rejects him and Steve sends him to find Stelio to beat him up instead. As he confronts Stelio at Klinko's, he fawns all over him as a legend and talks Stelio into joining together to beat up Steve, following a re-recording of Stelio's theme song for both of them.

Luis is voiced by John Leguizamo.

Retrieved from "https://americandad.fandom.com/wiki/Luis_Ramirez?oldid=74338"
Community content is available under CC-BY-SA unless otherwise noted.