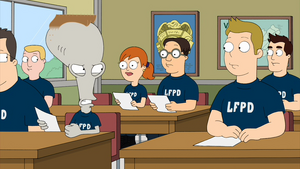 Lucas is one of the members of Roger's class at the police academy in "Cops and Roger". When they get their grades back from a quiz, Roger chats with him, noting his "B+" grade and bragging that he probably got an "A" and suggest that they study together. But when Roger finds he was given an "F", he turns on Lucas for not telling him what kind of soda he likes.

Retrieved from "https://americandad.fandom.com/wiki/Lucas?oldid=53367"
Community content is available under CC-BY-SA unless otherwise noted.