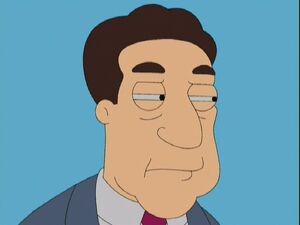 Lt. Goldberg is a detective with the Langley Falls Police Department.

Lieutenant Nathan Goldberg's family appear to be victims of the Nazi Holocaust from what we hear from an internal flash-back in which his father tells him to go to America and avenge their deaths. When Roger gets a job as a salesman in "Rough Trade", Maria threatens to destroy him in the sales contest with a trip to Hawaii as the prize. Roger gets help from Phillip, but Phillip puts his name on Roger's sales, stealing his prize. To get Stan out of prison, the family frames Phillip. Their story isn't believable, but when the police find out Phillip is a white supremacist and Nazi, Lt. Goldberg, remembering his father's last request to avenge his family, accepts their story to take Phillip into custody.

Retrieved from "https://americandad.fandom.com/wiki/Lt._Goldberg?oldid=51910"
Community content is available under CC-BY-SA unless otherwise noted.