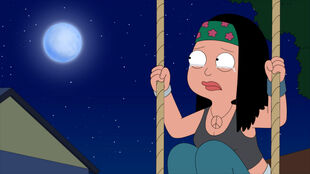 Lost in Space
Jeff must prove his love for Hayley to escape a slave ship. 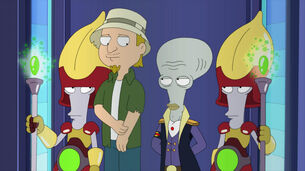 After being pulled aboard the ship sent to remove Roger, leaving Hayley to ponder his fate, Jeff finds himself a slave to work at a shawarma stand in a giant space mall. Working with Sinbad, they have to get busy when Emperor Zing comes by. Jeff protests that he misses his love, but is zapped and ignored. After work, they go out for drinks and Jeff is treated by a horny, shape-shifting bartender. Jeff finds that the only chance he has to escape his fate is to prove his true love for Hayley. However, to win his freedom, Jeff finds he must literally put his balls on the line. If he fails to prove his love, his privates will be removed and stored in a fishbowl. Taking the test, he finds he hasn't entirely treated Hayley well during his relationship. As Emperor Zing declares that he failed, Jeff protests that he really can love her right, but they declare that he still lost. Moping at the slave camp, he is tempted to have one last night of sex before losing his privates, but finds himself refusing to cheat on Hayley. He decides to face The Majestic to show his good times with her after realizing that only the downside of his relationship was shown. Lowering himself into the pit, Jeff confronts The Majestic and complains that he only showed the bad ones. 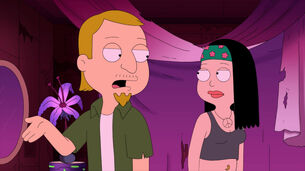 The Majestic reveals that his instructions were to only show the bad memories and that the Emperor also had a lost love. They decide to start a revolution among the slaves when Jeff is about to lose his privates and reveals the Emperor’s treachery to all of his citizens. With Sinbad's help, Jeff makes his way to an escape pod as The Majestic reveals the Emperor's own love life that was ruined by Roger cheating on him. The rest of his people join in the rebellion against him, leaving only his own guards to fight for him. Sinbad sends Jeff on his way while holding off the guards at the cost of his own life. Unfortunately, Jeff finds that he must explore thousands of worlds in order to find the right Earth. It's revealed at the end that Sinbad came back as a Jedi-like ghost to join Jeff on his journey.