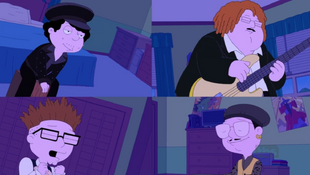 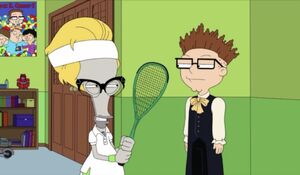 Steve refuses to be Roger's squash partner in order to hang out with his friends, so he plots to break them up. He strikes out trying to name their failings for blackmail and woo Steve away with hot girls, but he manages to get him to sell out his friends by scaring him by inhabiting a Chuck E. Cheese animatronic. But when he turns out to be rotten at squash, he ditches him. However, Steve is determined not to lose his only remaining friend and becomes clingy. 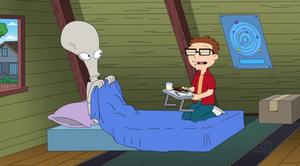 After complaining to Klaus, the latter suggests finding a way to reunite Steve and his friends, and takes him on a road trip to Florida to meet his friends that the family has refused to believe exist. Roger is impressed when he finds out that all the stories have been true and is struck by an inspiration when he spies a water moccasin in the kitchen. Gathering Steve, he takes him to a pool where he's already extended an invitation to his friends, and intends for Steve to save them from the water moccasin that he dumped in the pool. However, Steve finds his friends have already forgiven him, admitting they probably would have done the same thing if they had seen a giant rat. Roger finds that he dumped a cooler full of beer in the pool instead of the water moccasin, but ends up flipping the snake onto Barry, who is bit in the inner thigh. In a true gesture of friendship, Steve and the others take turns sucking out the poison. 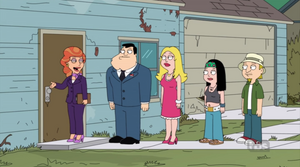 Meanwhile, Hayley discovers that Jeff has a talent for flipping houses and convinces Stan and Francine to help underwrite a business venture. Their first house is a dumpster fire, but they take it on on Jeff's advice. They gut the house, but when they try to offer it for sale, they get no takers. When he admits he really has no idea of what he is doing and screwed them over, they give chase. Jeff and Hayley manage to dodge Stan and Francine temporarily and barricade themselves inside the house. As the latter beat on the doors threatening them, Jeff admits he only did it to impress Hayley.

Retrieved from "https://americandad.fandom.com/wiki/Lost_Boys?oldid=83309"
Community content is available under CC-BY-SA unless otherwise noted.