For a complete script, see: "Live and Let Fry" on the Transcripts Wiki

Daniel Turlington: Mamma? If you can hear me, it's Daniel. I WANT THAT SANDWICH! 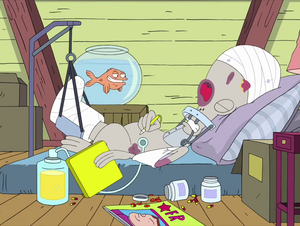 Klaus: [to Roger] Use your board!... [reads Roger's note] "How cute is Daniel Day-Lewis?" Oh good, the morphine is kicking in.

Francine: [to Hayley] Don't you judge me. Don't you know how hard it is to cook for this family? Not very, but I can't handle much.

Stan: Francine, if your cooking gets any better, I'm gonna have to get a stomach staple, and then bust it out Roker-style. Poor Roker. He will always be fat.
Francine: It's this new deep fryer. It just makes every single thing delicious. Look, I dropped my pen in there by mistake. [Bites into it] Oh! Fantastic!

Stan: What the hell, Francine?! This tastes like crap!
Francine: I know. I used to cook everything in oil containing trans fat, but since the new law, you can't get it anymore.
Stan: That's what trans fat is? The stuff that makes everything taste wonderful? Oh, why doesn't the city council just declare a war on flavor? Like the English did years ago.
Steve: Their food is atrocious.
Francine : I miss Lady Di.
Steve: She was the people's princess...
Stan: I know who she was, Steven!

[Bullock bursts in on Stan using the toilet]
Bullock: Why do you have a fork?
Stan: It's not a pretty story, sir.
Bullock: Withdrawn.

Steve: Dad, are you breaking the law?
Stan: Yes, son, but it's a stupid law. It shouldn't exist to begin with.
Steve: So, since the trans fat law is stupid, we don't have to follow it?
Stan: Smart boy. What can I buy you? New baseball mitt, skateboard?
Steve: Can I have a bunny?
Stan: To kill?
Steve: No, to love.
Stan: Aw, geez.

Greg: Who loves cute little kitties?
Terry: Guilty! [raises hand]
Greg: Then you'll love this ... The city pound is now keeping cats for only two days before they have them destroyed.

[Steve wakes up in the hospital after passing out on the kitchen floor]
Steve: Dad?
Francine: He's waking up!
Steve: What happened?
Stan: Son! You're okay. Turns out you didn't have a heart attack after all... which, in my opinion, makes all your dramatics on the kitchen floor a bit uncalled for, but whatever. You thought what you thought.

Retrieved from "https://americandad.fandom.com/wiki/Live_and_Let_Fry/Quotes?oldid=89097"
Community content is available under CC-BY-SA unless otherwise noted.