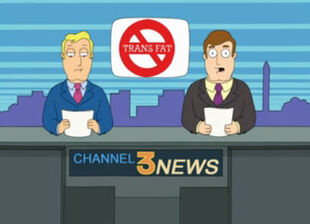 Live and Let Fry
Transfats are banned in Langley Falls and Stan does all he can to get his fix. 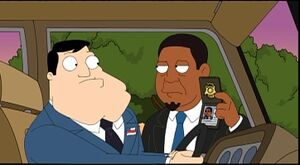 Stan gloats when he reads about his rival Chuck White's wife, Christy, being caught getting high in the parking lot of the local multiplex. Hayley protests the law against pot, but Stan defends it, saying the law should be followed no matter how stupid it seems. But when Langley Falls implements a ban on trans fats, Stan finds himself legally separated from his favorite foods. He begins smuggling trans fats into Langley Falls from Chimdale and initially it is very easy. On his second trip, Stan is stopped by Internal Affairs Officer Turlington who is patrolling the city border, forcing Stan to discard all his trans fats or risk being caught with them in the car; if he is caught, Stan will be put in the newspaper's "Crime Beat" section and humiliated. After getting home Stan is reprimanded by Francine, who has taken to deep frying all their meals and refuses to stop doing so, so Stan decides to use Steve as a trans-fatty food mule as his innocence will hopefully elude suspicion.

Initially Steve seems to be able to smuggle the trans fats without arousing suspicion, and his first few trips to Chimdale are successful. However, after Stan's flagrant disregard for the law, Steve decides that the law requiring him to wear a bike helmet is also unnecessary. While riding his bike back from Chimdale, with a basket full of trans fats, Steve is pulled over by Officer Turlington. As Officer Turlington inspects the bike Steve claims his basket is full of sandwiches for the poor. Turlington asks to buy a sandwich so, while Turlington is searching in his car for the money, Steve tries to discard the trans fats. As Steve moves to get off the bike however he traps his trainer on the bike pedal, so he quickly begins to eat all the trans fats before Turlington returns. 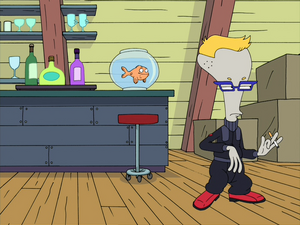 Unfortunately, though he emptied them all, Turlington still sees the empty cans and becomes suspicious. When Steve gets home he tells Stan what happened and that he was followed home by Turlington, then Steve starts to have a heart attack. With the possibility of being discovered Steve suggests that they kill Turlington or firebomb the newspaper, which Stan objects to, as he collapses. Realizing the trouble he had caused by turning his own son into an amoral smuggler, Stan rushes Steve to the hospital. When Steve wakes six weeks have skipped by while he was in a medically induced coma, Stan has already paid the price for breaking the law and has already moved on and it is revealed that Steve didn't have a heart attack, just angina.

Meanwhile, Klaus learns that his great-aunt has died and he will collect an inheritance. He has Roger pose as him, mimicking his mannerisms and memorizing his life stories. However, when Roger goes to collect the inheritance, he is beaten mercilessly by gangsters. Klaus later reveals that he had a huge gambling addiction and owed a fortune to the East German mafia.