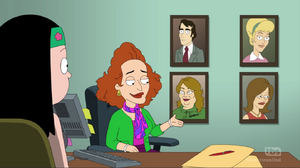 A portrait of Linda Bloodworth-Thomason hangs on the Groff Community College Wall of Fame in "Pride Before the Fail", despite her never attending school there.

Retrieved from "https://americandad.fandom.com/wiki/Linda_Bloodworth-Thomason?oldid=84610"
Community content is available under CC-BY-SA unless otherwise noted.