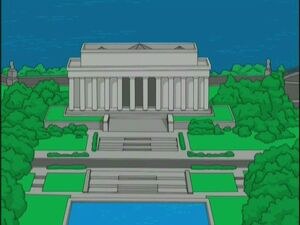 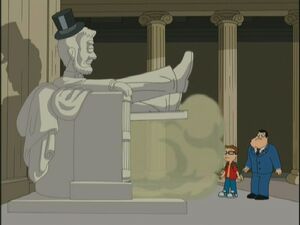 The Lincoln Memorial is an American memorial built to honor the 16th President of the United States, Abraham Lincoln. It is located on the National Mall in Washington, D.C. and was dedicated on May 30, 1922. The architect was Henry Bacon, the sculptor of the main statue (Abraham Lincoln, 1920) was Daniel Chester French, and the painter of the interior murals was Jules Guerin.

Although appearing incidentally throughout the series as a locale, the Lincoln Memorial plays a pivotal role in "Black Mystery Month" as the hiding place of the "Jar of Proof", a jar containing the various names Abraham Lincoln tried to come up with for peanut butter to give credit to a black man to try to ease reconciliation with the South following the Civil War.