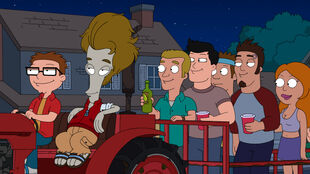 License to Till
When Steve has trouble crossing over into the “cool kids” social circle, Klaus and Roger place their bets to see how quickly Roger can make him cool.

Roger's Disguise: Chex LeMeneux from "The Return of the Bling" 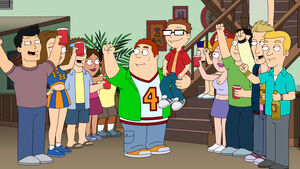 When Steve and the guys volunteer to help Snot's uncle Solomon out on his farm, Steve dreams of hanging out instead with the cool kids. While Roger and Klaus hang out at the mall, After Roger brags about how he could make anyone cool, Klaus wagers Roger that he can't take the next loser to appear on the escalator and make him cool. After accepting the bet, to Roger's dismay Steve appears having been spotted about to arrive by Klaus. Forced to work with Steve, Roger tries to stuff Steve's shorts with sausage which fails when an assistance dog smells the meat and attacks him. Roger then suggests beating up a wimpy kid but the plan fails to gain Steve respect when he beats up a much younger female student.

Klaus tries to suggest Roger throw in the towel but Roger says he'll help Steve get his driver's license until Klaus points out that Steve is only 14 and too young. After checking the DMV manual, Roger concedes that Steve is too young to drive a car but has Steve arrive at school driving Solomon's tractor. The cool kids clique doesn't buy it and Steve returns to the farm. At a party later, the cool kids learn of a better party across town but no one is sober enough to drive. Roger hits on the idea of calling Steve to bring the tractor back to ferry everyone to the second party. Steve becomes a success and Roger photographs Steve being hoisted by the cool kids for proof of winning the bet with Klaus.

However, Snot and his uncle become concerned when Steve delays returning the tractor so Snot heads to the party where he is snubbed by Steve. As Steve is about to ferry the gang to Taco King, Steve's glasses are knocked off and a lens is broken, leaving him unable to drive. As the cool kids abandon him, Snot arrives with a spare lens. Snot reminds him of their friendship and they return the tractor, only to have it run out of gas and be useless for bringing in uncle Solomon's crop. 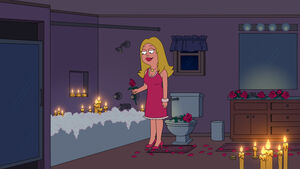 Meanwhile, after getting back from a mission, Stan discovers that his usual surprise gift for Francine holds no surprise anymore. Trying to surprise her, Stan tried jumping out and scaring her. When Francine explains that she meant a romantic surprise, Stan sets up an elaborate romantic night in the house but leaps out of the bathtub scaring Francine again. As Stan plans yet another surprise for Francine, Francine turns the tables and scares Stan twice in succession, leaving him shaking. Jeff and Hayley arrive home to find Stan standing in the middle of the street. Determined to avoid Francine, Stan decides to head to a hotel but after checking out the SUV, Francine grabs him from her place of concealment as a seat and they crash into a neighbor's garage where they decide to call a truce. Later, Stan arrives and loudly announces his intentions to Francine who confirms them back. As they agree that they got caught up in the moment, Stan places a box of Chinese takeout on the counter, but when Francine reaches for it the CIA's midget assassin leaps out and Francine stabs him in the throat with a pair of chopsticks, killing him.

Previous Episode /// License to Till \\\ Next Episode

Retrieved from "https://americandad.fandom.com/wiki/License_to_Till?oldid=79456"
Community content is available under CC-BY-SA unless otherwise noted.