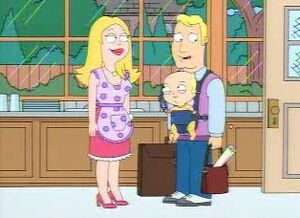 Liberty "Libby" Belle is the child of Greg Corbin and Terry Bates, with Francine Smith acting as a surrogate mother. In "Surro-Gate", Greg and Terry search frantically to no avail to find the perfect surrogate. Francine offers to carry the child, stating that she doesn't drink or smoke. Greg and Terry gratefully accept while Francine keeps her intentions secret from Stan. Stan remains completely oblivious to this, believing Francine has merely gained weight, though eventually finds out and becomes furious. When Hayley confronts him about stressing Francine being harmful to the baby, Stan reluctantly agrees to support her pregnancy.

Francine soon gives birth to a healthy baby girl. However, believing gays cannot properly raise a child, Stan kidnaps the baby of whom he names "Liberty Belle" with the intention of bringing her to Nebraska where gays have no rights, and putting her up for adoption. On the way, Stan comes across a healthy family parented by a lesbian couple. Seeing this, Stan apologetically returns Liberty to Greg and Terry. The couple are initially unwilling to forgive Stan, taking out a restraining order against him; however, they are shown to be friendly again in later episodes, and even give their daughter a variation of the name that Stan chose for her.

Greg and Terry have her learning fencing and speaking French, one of three languages they intend for her to learn in order to get into a good college in "Spelling Bee My Baby". This episode marks a significant growth spurt, as Libby is clearly no longer an infant.

In "First, Do No Farm", Libby has de-aged back to her original appearance.

Libby is voiced by Stacy-Love Belizaire in "A Boy Named Michael".