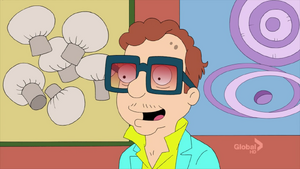 Lew Schneider is Snot's uncle who signs on Steve and his friends to make a music video in "Can I Be Frank (With You)" after hearing them sing at Pizza Overlord. When they arrive at his office at Responzible Recordz, they find he has decided to merge two other boy bands with them to make a super group boy band, Boyz 12. But after investing a lot of money in costumes and set pieces for their video "Girl You Need A Shot (Of B12 (Boyz 12))", he finds out from a janitor friend at Arista Records that they have been trumped by an even larger boy band, "Boyz 13" and shoots himself, leaving Snot to call his mother to tell her of his suicide.

Retrieved from "https://americandad.fandom.com/wiki/Lew_Schneider?oldid=51847"
Community content is available under CC-BY-SA unless otherwise noted.