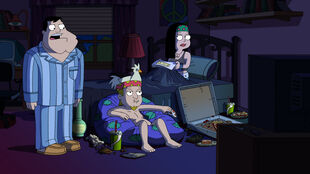 Roger's Disguise: Lawrence of Arabia from "Don't Look a Smith Horse in the Mouth" 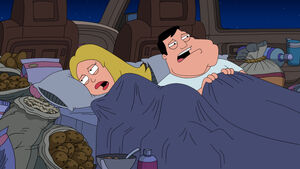 After losing patience with Hayley and Jeff for their freeloading ways, Stan bets the young couple that he and Francine can live on minimum wage for a month. After taking their allowance, Hayley forces them to do without their SUV and take the bus just as they do. They soon find they are forced to live in a crime-ridden neighborhood apartment. Francine wants to throw in the towel but Stan refuses to admit defeat. Stan decides to change the game by buying a Pontiac Aztek to camp in along with potatoes and rice to eat, spending nearly all of their money in the process. Not happy with the city camping, they find things are even worse when the car is towed while bathing in the park. Despite trying to live on samples at the grocery, Francine refuses to go along further and heads for home, leaving Stan to face an angry store manager.

Stan continues to live on the streets, refusing to let Francine and Hayley win but is turned down for employment and steals the manager's shoes but is chased by the Shoe Police. When Stan runs for it, he is hit by Steve and Roger. Seeking out medical attention, he gets fed up with the wait and tries to heal himself with used and makeshift medical supplies. A street person talks him into huffing his waste and robbing a home. Stan decides to rob his own home, but when they are caught, Jeff stabs the bum and Stan finally admits defeat and agrees to let Jeff and Hayley stay. The bum comes to to be stabbed by Jeff again and the family thinks he is playing Pictionary with his blood as he struggles to force the knife out. 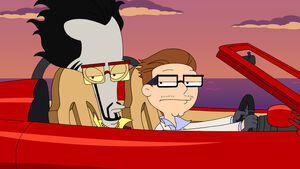 Meanwhile, after their fantasy is challenged by Klaus, Roger hates to think that Klaus has done something he hasn't so Steve and Roger embark on a mission to test drive the car of their dreams. They try to bluff their way through a Ferrari dealership and manage to test drive the car and they take it to show Klaus in Las Vegas who is amazed they pulled it off.