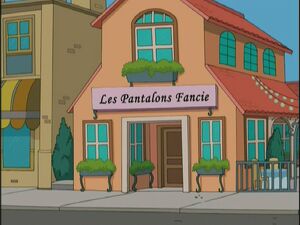 Les Pantalons Fancie, translated as 'The Fancy Pants', is an upscale restaurant in Langley Falls.

In "Not Particularly Desperate Housewives", Francine shares fake love letters with the Ladybugs from her 'affair' with Hector, the valet at Boo!.

Roger in his persona of Jacob takes Sharri Rothberg on their first date here in "An Apocalypse to Remember".

Stan tries to take Francine out to dinner and finds he is treated as a nobody in "Meter Made". After becoming a meter maid, he returns and is treated as royalty.

Francine and Roger find out that Hercules is out on a date with Stan's mother Betty Smith in "Oedipal Panties" and rush to Les Pantalons Fancie to warn him that they believe she kills her dates. When they observe her following him in the direction of the rest room, Francine rushes in to save him just as he's being dragged into an air duct. Francine pulls Hercules back into the restroom and rushes out to confront Betty, however, she learns that Stan has been abducting all her dates and putting them on an uncharted island in order to be close to her.

Stan treat Francine to a Valentine's dinner in "Wife Insurance" where he reveals a plan to marry Meg Penner if anything happens to Francine.

Stan tries to break up a dinner date between Roger and Stan's CIA boot camp crush Scarlett Reynolds in "The Scarlett Getter". Roger knocks Stan out in the bathroom and vows to have sex with Scarlett.

Steve fakes firing Stan from Wheels and the Legman at the restaurant in "Wheels & the Legman and the Case of Grandpa's Key".

Retrieved from "https://americandad.fandom.com/wiki/Les_Pantalons_Fancie?oldid=37437"
Community content is available under CC-BY-SA unless otherwise noted.