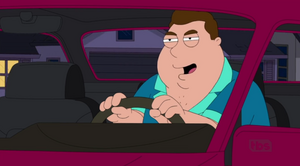 "Last Resort" is a song by rock band Papa Roach, first appearing on the soundtrack to Ready to Rumble and appeared on Papa Roach's debut album, Infest. "Last Resort" was released as the album's lead single and reached number 57 on the US Billboard Hot 100.

Tuttle sings "Last Resort" along with the radio as he drives though town in "The Hand that Rocks the Rogu", unaware that he is in Rogu's path as he heads toward the Shark's Nest.

Cut my life into pieces
I've reached my last resort
Suffocation, no breathing
Don't give a hoot if I cut my arm, bleeding
[Rogu picks up the car and proceeds to insert it into his anus. Tuttle gasps for a moment before resigning himself to his fate]
The is my last resort...

Retrieved from "https://americandad.fandom.com/wiki/Last_Resort?oldid=85851"
Community content is available under CC-BY-SA unless otherwise noted.