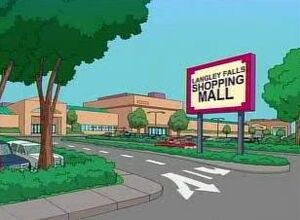 The Langley Falls Shopping Mall is the major shopping center in Langley Falls, Virgina. It's symbol was temporarily "Chief Shop-a-holic" during an expansion onto Indian burial ground until the statue was destroyed by Arboreus and his gang of eco-warriors in "Finances With Wolves".

In the Pilot, Stan tries to make Steve appear a hero for some girls but turns out to be too good a thief by managing to escape.

Steve and the gang plot a way to earn money for a gamestation in "Threat Levels".

Steve tries to pick up Lindsay Coolidge in "Francine's Flashback" and Jewel horrifies the mall.

"Finances With Wolves" features extensive coverage of the mall when Francine opens a muffin kiosk, Stan has trouble parking and Arboreus and his crew plot to blow up the mall.

Stan meets personal trainer Zack at the mall in "The American Dad After School Special".

In "The Best Christmas Story Never", Stan and the family celebrate Christmas...with The Holiday Rapist dressed as an elf.

Steve tries to keep his date with Lisa Silver while stuck in a preschooler's body in "1600 Candles".

Hayley goes on a rampage there when Jeff Fischer breaks up with her in "Pulling Double Booty".

When Roger and Hayley compete to see who is more attractive in "Stan's Night Out", Tyler posts to craigslist claiming he was too shy to approach the two of them. Roger and Hayley plant themselves at the mall where Tyler chooses Roger over Hayley.

After the Smith's make up with Roger when they catch him hanging out and cheating on them with The Johnsons in "Family Affair", they go out for a meal at the mall where they bump into Norman and his family who tells them that Roger had just eaten with them.

Stan takes Roger pants shopping as part of a plot to dump him and meet with General Juanito Pequeño in "Moon Over Isla Island".

Roger and Francine are mugged outside of the mall in "Cops and Roger".

Steve shoots Santa behind the mall in "For Whom the Sleigh Bell Tolls".

Andy Dick goes on a rampage, leaving the mall a flaming shambles in "You Debt Your Life".

Stan hears of the church putting on the story of Christ at the mall in "Season's Beatings" and rushes to get the lead role, only to be told by Father Donovan that he is too fat. He is instead given the role of Santa Claus but when he finds out the Roger got the role of Christ attacks and beats him senseless.

Francine teaches Steve how to shoplift at the mall in "Crotchwalkers", but when he is caught pulling one last heist at The Gash, he is sent to work in their overseas sweatshop.

Francine takes Roger to the mall when he seems extra clingy in "Blagsnarst: A Love Story", but while there, he catches a scent that leads him to a female alien that has crash landed.

In "Dreaming of a White Porsche Christmas", Francine tries to get Stan to hurry up with his half-hearted shopping to pose with Santa for the Christmas card.

Stan goes on a shopping trip for an anniversary gift for Francine after having her temporarily committed to a mental hospital in "American Fung", but forgets why he is there and has fun shopping for himself.

Roger tries to go on a shopping spree with his new Discovery credit card in "The Devil Wears a Lapel Pin", only to be rejected by all of the regular stores. When he is pushed into a dumpster, he finds another Discovery user who leads him to an underground 80s section of the mall where his card is accepted on vintage goods.

When Stan becomes hooked on slot car racing in "Whole Slotta Love", Francine tries to get him a makeover at the mall, but the clerks are unable to help and only laugh at his unsexy habits.

When Stan get a nail stuck in his head in "Eight Fires", the family takes him to Nordstrom at the mall to get him a hat to hide it.

When Roger is shattered into 300 pieces in "300", the Smith's locate his ear at the mall with Rogu's help. Unable to deal with his loose body parts, they buy a stuffed bear to attach the pieces to.

Retrieved from "https://americandad.fandom.com/wiki/Langley_Falls_Shopping_Mall?oldid=91326"
Community content is available under CC-BY-SA unless otherwise noted.