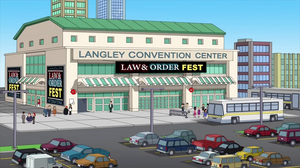 The Langley Convention Center is the site of a Law & Oder convention that the Smith family attends in "The Census of the Lambs". They name off their best and worst parts of the convention, although Stan decrees that the 'worst' entries are trick questions because there is no worsts about the show. Hayley notes that she met Ice-T while Stan gets a poster of celebrities who appeared as judges who now work at the convention center. He also stole the clarinet played in the opening credits which he plays to security's frustration. When they call him a coward, Francine joins him in playing it together.

Retrieved from "https://americandad.fandom.com/wiki/Langley_Convention_Center?oldid=76763"
Community content is available under CC-BY-SA unless otherwise noted.