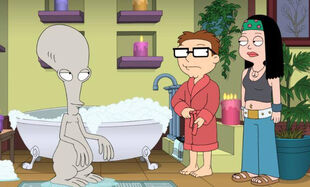 Roger's Disguise: Bing Cooper from "I Am the Walrus" 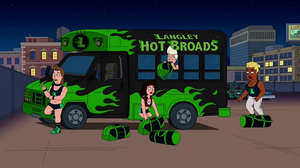 Hayley attends a roller derby match with Klaus, admiring the skaters. After the match, she approaches the team to express her interest and is invited to try out for the team. When she admits that she is straight, Iris, the team captain is mildly surprised but tells her it doesn't matter. Meanwhile, Stan and Francine keep dealing with house breakdowns, with Francine getting on Stan's case for not calling a repairman while he complains about being too busy with work. Hayley brings news of the tryout as Steve expresses his doubts about her ability, but takes her up on her offer to come watch. 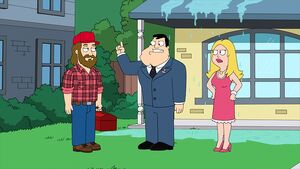 Hayley arrives at the rink to find Roger is the day manager. While Steve shows off his skating skills due to many hours of practice to avoid his home life, Hayley is a klutz. She tries to beg her way onto the team but can only participate if her “sister” can skate with them. When Stan tears up the roof to repair the house his way, Francine gets so fed up that she insists that it will take a miracle to repair the house. At that moment, a carpenter magically arrives who offers to take up their job. But as they walk away, he levitates himself to start work. Hayley convinces Steve to pose as a girl by convincing him that he could get a sexual thrill out of it.

Roger encourages the girls and sets off to fight a rat. Steve gets real close to all the girls during dressing and the match and becomes a hit. At a post-match party with the girls, Steve zeroes in on a particular girl but Hayley has to pull him aside to remind him that he is posing as a lesbian, a fact that remains difficult to deal with. Despite Hayley's warning, she finds that Steve has continued to see the girl and worries about getting kicked off the team. 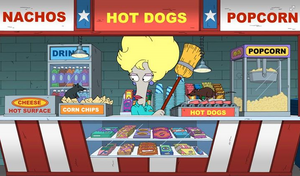 The house repairs go magically well although Francine's garden strikes a sour note with her. Before the championship match, Hayley blurts out the truth about Steve but finds that the girls already know the truth and accept that Steve is a girl trapped in a boy's body, informing him of the facts. However, Hayley is kicked off the team and is surprised to find that she is not as open-minded as she thinks she is. Later, she catches up with Steve who is still in shock from his revelation as well..

Back at the Smith home, they finally have the house of their dreams, but when they find that their fence was repaired without their wishes, they turn on the repairman. Hayley apologizes to Steve and Roger offers to help Steve with his own sexual confusion, trying to set him up as a girl. After a long bath, Steve concludes that he is really a boy when he is attracted to a sexy lady on a shampoo bottle and masturbates repeatedly. They break the news to the team where they accept his decision, but make him agree to perform in their last match, helping him continue to pose as a girl by taping up his genitals as a team.

Retrieved from "https://americandad.fandom.com/wiki/LGBSteve?oldid=80280"
Community content is available under CC-BY-SA unless otherwise noted.