To start a complete script, see: "LGBSteve" on the Transcripts Wiki

Klaus: These women are warriors. They live by the code of the ancient Amazons. A sisterhood who have each other's backs.

[Hayley informs Iris that she's straight]
Iris: Straight huh? Not getting that from you.

[A drunk Klaus falls out of his fishbowl]
Klaus: Steve, you want to go grab a beer?

Steve: You're going to try out for roller derby? Hah, I'd love to see that. You don't even have your own skates.
Hayley: Well, you can come watch if you'll let me borrow a pair.
Steve: Inline, roller or sequined roller? Ha, that's a trick question. They're all sequined.

[Steve skates past Hayley like a pro]
Steve: Hey sis, hope your friends don't just eat pussy, 'cause I'm about to shoot the duck. 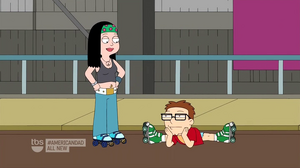 [Hayley convinces Steve to pose as a girl so she can join the roller derby team]
Steve: I'll do it, I'll pretend I'm a girl. Also, it might not be a lie because that split just destroyed my balls.

Steve: "Stevie Wonderbra". I like it 'cause it's about tits.

Hayley: I haven't had this many female friends since that bunch of popular girls in high school tried to trick me into killing myself.

Francine: Tulips!? Where did you find this asshole?

[After Hayley outs Steve as a boy, everyone reveals that they already knew]
Iris: We know.
Steve: You do? Did you know?
Devin: Of course I did. You've had a boner for like, two weeks.
Iris: But having a penis doesn't make him a boy.
[Almost simultaneously]
Hayley: It doesn't?
Steve: Are you positive?

Roger: Ok, Steve. If you're looking for gender clarification there's a number of things we can try. First, we raise some cash to get that dick off you.
Steve: Whoa, coming in hot.

Retrieved from "https://americandad.fandom.com/wiki/LGBSteve/Quotes?oldid=88458"
Community content is available under CC-BY-SA unless otherwise noted.