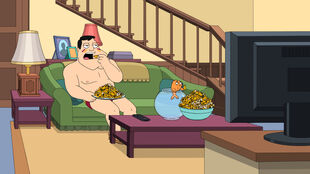 Kung Pao Turkey
Stan has to spend the holiday with the in-laws. 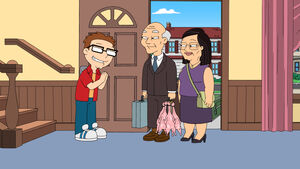 Stan goes downstairs on Thanksgiving Day looking forward to a day of football. Francine reminds him that her parents are coming over as Stan tries to cut the idea off, but Francine insists. As Stan glumly greets his in-laws as they arrive, Mah Mah Ling chats with Hayley who is still depressed over Jeff and suggests she get rid of his stuff. As dinner is being prepared, Stan complains over the non-traditional dinner and Bah Bah loses the television signal while trying to fix it. Francine tries to get Stan to get along with her parents but Stan decides to get rid of them instead.

Getting Klaus to join in his plot, he plots to scare them away by dressing in things he believes will frighten them but fails. As they return to trying to fix the television, Roger arrives dressed as a nerd to fix things, but is useless as Stan is still determined to get rid of his unwanted guests. Hayley reluctantly gets rid of Jeff's stuff and Mah Mah sets her up with a new guy, Big Wang Bai. Wang seems like a winner but Mah Mah has a change of heart after she decides he is too good for her. Roger fixes the television and they return to the game, but Stan still wants rid of the Lings and finds he has been denied his accustomed place at the table as he has to take out the garbage. Big Wang arrives and surprises Mah Mah. Mah Mah tries to pass herself off as Hayley but fails, leaving Hayley with Wang, but he dumps her for Roger. 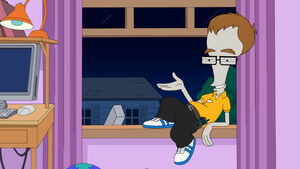 While taking out the garbage, Stan sees his headdress in the trash and decides to leave. Driving away, Stan stops at a soup kitchen but is turned away for not being homeless. Stan drives to FedExField where the Redskins are facing off with the Cowboys but can't get in without a ticket. Wandering through the tailgates, he meets Laura and Marvin who treat him to some hospitality and warm him. In return, Stan saves their cookout when their grill fails by cooking the food on the engine of his car. Sitting down with the other tailgaters, Stan learns about sitting down with opposites and returns home with a new appreciation for family, no matter how annoying they are as Klaus pokes a hole in the show by noting that the Cowboys are playing in their own stadium and they will need to be able to explain the discrepancy to the fans at Comic-Con.