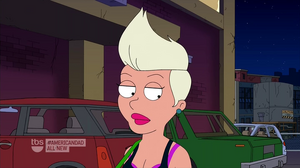 Kristin Chenoweth (born July 24, 1968) is a Tony and Emmy award winning actress and singer. Among her best known Broadway credits include Sally in You're a Good Man, Charlie Brown, Fran Kubelik in the revival of Promises, Promises, and, most famously, originating the role of Glinda in Wicked. Among her best-known TV credits include Olive Snook in Pushing Daisies and April Rhodes in Glee.

Kristin provides the voice of Devin in "LGBSteve".

Retrieved from "https://americandad.fandom.com/wiki/Kristin_Chenoweth?oldid=60813"
Community content is available under CC-BY-SA unless otherwise noted.