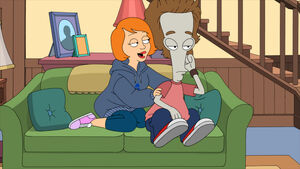 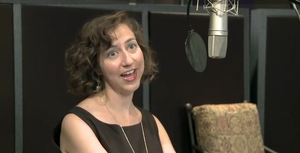 Kristen Schaal is a comedian and actress. Among Schaal's best known credits are Flight of the Conchords, The Daily Show with Jon Stewart, her own Comedy Central Presents special, and as the voice of Louise Belcher on Bob's Burgers.

Schaal provides the voice of Roger's one night stand in "Hurricane!" and as the librarian in "Stan's Best Friend".

Despite their similar last names, Kristen Schaal is not related to Wendy Schaal, the voice of Francine.

Retrieved from "https://americandad.fandom.com/wiki/Kristen_Schaal?oldid=62974"
Community content is available under CC-BY-SA unless otherwise noted.