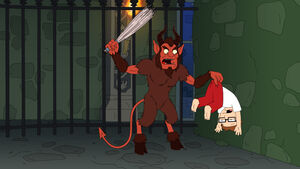 Krampus is a mythical creature recognized in Alpine countries. According to legend, Krampus accompanies Saint Nicholas during the Christmas season, warning and punishing bad children, in contrast to St. Nicholas, who gives gifts to good children. When the Krampus finds a particularly naughty child, it stuffs the child in its sack and carries the frightened child away to its lair, presumably to devour for its Christmas dinner. Krampus is represented as a beast-like creature, generally demonic in appearance.

When Steve misbehaves, his grandfather Jack Smith tells the story of how, as a boy, he captured the legendary Krampus in "Minstrel Krampus". Tired of Steve's brattiness, Stan allows the Krampus to go free but he kidnaps Steve and demands Jack be brought to him. But when Stan uses his CIA connections to free Jack, he instead flees, leaving Stan and Roger to try to make a deal with Santa Claus who still bears a grudge after the events in "For Whom the Sleigh Bell Tolls", but is willing to go along in order to kill the Krampus.

Meanwhile, Steve discovers that the Krampus only punishes children because he loves them and tries to set them straight and bonds with him, just as Stan and Santa arrive and Santa kills the Krampus before turning the gun on Stan. Jack, who has had a change of heart, takes the bullet meant for Stan. As Santa flees, Jack and the Krampus' blood intermingles, transforming Jack into the new Krampus.

Before his transformation with Jack, Krampus had a failed relationship with a woman named Sheila, who cheated on him in Baltimore.

When traveling through the wormhole in "The Longest Distance Relationship", Sinbad and Jeff Fischer turn into stylized characters including that Santa Claus and Krampus.

Krampus was to be a panelist for the Mayoral election in "Railroaded" before the segment is cut short.

Krampus' speaking voice before his transformation is done by Danny Glover. His singing voice is by Charles Bradley.

See: Jack Smith for his post-transformation into Krampus.

Krampus and Jack both appear during "Everyone is Happy in Utopia" in "300".

Retrieved from "https://americandad.fandom.com/wiki/Krampus?oldid=91212"
Community content is available under CC-BY-SA unless otherwise noted.