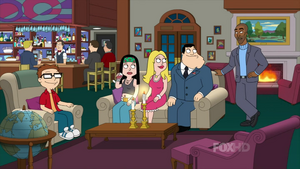 In 2003, Bryant was accused of sexual assault at a hotel in Edwards, Colorado by Katelyn Faber. Bryant admitted an adulterous sexual encounter with the accuser, but denied the sexual assault allegation. In September 2004, prosecutors dropped the case after his accuser informed them that she was unwilling to testify. Bryant's accuser brought a separate civil suit against him that was ultimately settled out of court.

The Smiths try a simulation to avoid Kobe's sexual advances at the American Safety Museum in "Vision: Impossible", only to discover that it is impossible to beat.

Retrieved from "https://americandad.fandom.com/wiki/Kobe_Bryant?oldid=85936"
Community content is available under CC-BY-SA unless otherwise noted.