watch 02:02
'American Dad' Recap: Kloger
Do you like this video?
Play Sound 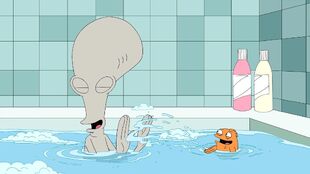 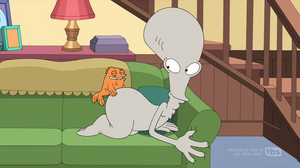 Tired of being lonely, Roger follows Francine's advice to try online dating and connects with a stranger. They arrange to meet in person at a bar, but when he arrives, he finds it is actually Klaus. Their small talk leads to hot, sweaty sex back at home and they soon begin sneaking around the family to carry on their relationship. But when they get caught, Roger decides to bring their relationship fully into the open. 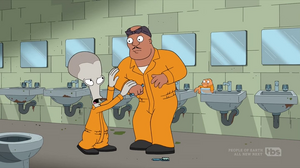 Over a dinner with Stan and Francine, Roger gushes about all of the couples things they could do, but Klaus breaks off the relationship, having only been interested in the original sneaking around. Roger gets himself adopted by Klaus so he can break taboos by having sex with his daughter, but is still rejected. When a passing police officer hears the noise, he arrests Klaus after Roger claims he's having sex with "her." In jail, Klaus enjoys the company of the other prisoners, but Roger gets himself incarcerated and stabs an inmate over Klaus before being dragged away to solitary. There, he is shown slowly losing his mind. A month later, Stan and Francine arrive to pick them up and Klaus quietly doesn't want to talk about his experience, but Roger arrives feeling happy. He explains that solitary allowed him to get used to being alone, except for the voices in his head that constantly talk to him and manifest in his personality. 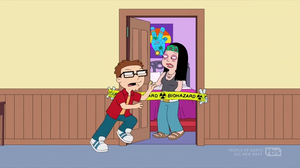 Meanwhile, Steve finds that the school is being forced to complete a physical fitness program in front of their classmates, so he tries to get excused but is rejected. When he finds Hayley is posing as a student for treatment of her pink eye, he tries to catch it. When she foils his attempts, Jeff offers to help. During the fitness test, Jeff's plan of acting crazy fails to impress, so Steve resorts to soiling himself, which finally results in getting out of the test and being awarded for his bravery.

Retrieved from "https://americandad.fandom.com/wiki/Kloger?oldid=86340"
Community content is available under CC-BY-SA unless otherwise noted.