Klaus and Rogu in "Thank God for Loose Rocks": An American Dad! Adventure 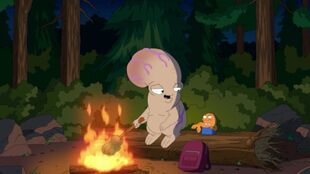 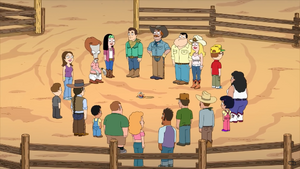 As Klaus shows off his new outfit for the Smiths' annual trip to a Octuple J Dude Ranch, he finds out that Rogu has been invited along too and steals not only his outfit, but gets all of the attention. To get even, Klaus frames Rogu for the disappearance of the ranch mascot, Tequila Joe. As a result, they are both sent into the woods to locate him. When they do locate him, they try to ride him back to the ranch, but find out firsthand about his reputation for being unrideable, and are sent flying down a waterfall.

Meanwhile, as Stan mourns the loss of Tequila Joe, the host warns of mountain lions in the woods. Rogu saves Klaus after their trip over the falls, and again when they are attacked by one of the mountain lions, which Rogu kills, although Klaus is injured. But just when it appears they will be able to bond, Rogu falls down a mine shaft. Klaus starts to betray him, until he discovers that Rogu can still climb his way out. He tries to reverse his stance until Rogu slips and has his arm pinned by a rock, allowing Klaus to declare his betrayal back on. 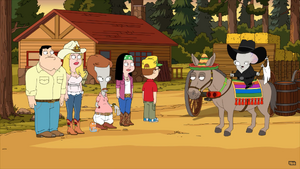 Klaus returns to the ranch and spins a tale of Rogu drowning, but admits to Roger later what exactly did happen. The latter points out that their species has the ability to bite through and regrow limbs at will, and reports that Rogu is probably already free and on his way for revenge. Indeed, Rogu arrives and starts shooting anyone in the open in the crotch before riding in on Tequila Joe with an offer to allow everyone to go free if they surrender Klaus. When they refuse, as Klaus is part of the family, Rogu rides away, but declares there will be no survivors when he returns that night.

Klaus meets him in the woods to surrender himself, and admits he was wrong about Rogu, declaring him to be part of the family as well. The latter accepts the apology, but is still determined to kill Klaus for abandoning him but is attacked by a second mountain lion. This time, Rogu is saved by Klaus, who uses his rope skills to tie it up. Rogu still pulls a gun on Klaus, but allows him to live as he jokes that he can't shoot him in the dick because it's too small.

Although saddened by not getting to ride Tequila Joe, Stan is able to be satisfied with a hug as Billy sits and waits on the Smiths' doorstep for them to come home.