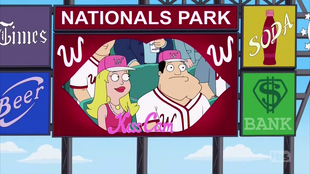 Deer in the headlights

Kiss Kiss, Cam Cam
After Stan and Francine have a terrible "Kiss Cam" experience, Stan questions everything about their marriage. 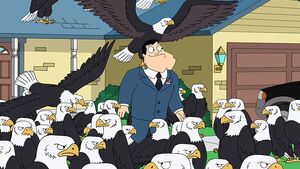 Klaus tells Francine about writing a story as Stan arrives with season tickets to the Washington Nationals baseball team for her birthday, although she is not pleased. Klaus points this out to Stan who brushes off her displeasure. At the game, Francine finds she can't get food or souvenirs that she likes. Her attitude gets to Stan who explodes, and when they end up on the kiss cam, they have an accident that results in a bloody nose for her when their baseball caps collide.

At home, Stan feels like they have nothing in common as he confides in Klaus, Jeff and Hayley. They suggest he take the time to work on their relationship, although he takes part of Jeff's statement to mean to rush things by going back to the ballpark and getting back on the kiss cam. Frustrated by not getting on the kiss cam, Stan steps away and misses a triple play to have a word with the camera operator, only to get turned down due to the poor performance previously. After heated exchange, he is ejected from the ballpark and Francine refuses to join him. 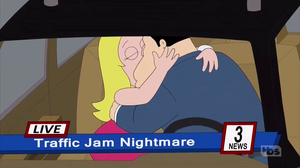 At work, he is comforted by Bullock as he explains what happened and Bullock puts the CIA at his disposal. They arrange for Stan to work as a Cuban fieldhand and ballplayer. There, he is spotted by a scout and sneaks his way back into the United States. Following time in the minor leagues, he is signed by the New York Yankees but is suspended following a steroid scandal and is eventually signed by Washington and works his way back into the stadium as a player. In the clear, he tears off his uniform and rejoins Francine. With Dick manning the camera, they almost get their kiss until the camera operator gets into a struggle with Dick and Stan and Francine are both kicked out. On the silent ride home, Stan slams on the brakes and laments that they can't share anything and finds out that Francine is now a baseball fan and they have a lot of other things in common as their sudden stop has caused a significant pileup on the freeway and they get their camera kiss on the news. 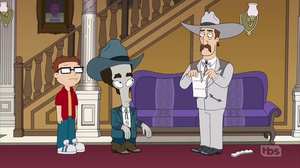 Meanwhile, Roger and Steve bake a cookie as a victim of one of his scams arrives at the door seeking for him to keep his promise of clean water, only to get the brush off. Roger has to explain to Steve that he was elected to the Nevada legislature on the promise, but dumped the job when he discovered that the job didn't include drinks at Nevada buffets. Steve convinces him that he needs to help so they head off to Carson City. As politician Burt Jarvis, he runs into resistance to provide the clean water as he had promised and runs for re-election as well after being absent for so long. Steve finds the source of the pollution and they head to Tetradual Inc. to take undercover photos, to discover that another of Roger's personas is the CEO. Taking over, he shuts down the facility and keeps his promise to clean up the water, although he drops his election campaign as Tetradual was his biggest supporter. However, as the CEO of starting up a new company, he throws his support to a rival candidate.

Retrieved from "https://americandad.fandom.com/wiki/Kiss_Kiss,_Cam_Cam?oldid=88745"
Community content is available under CC-BY-SA unless otherwise noted.